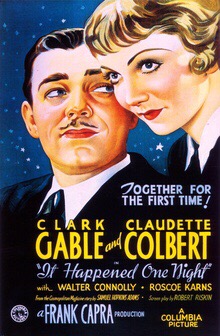 Ellie Andrews: What is it that we’re supposed to be doing again?

Ellie Andrews: Well you’ve shown me an excellent example of the hiking part. When does the hitching come in?

F: Didn’t think I had but whilst we were watching it I realised I may have seen it once before.

F: I have a trivia question I like to break out at parties which is ‘name the three films which won all of the big five Oscars’. All three are in the AFI list (one we’ve seen, one still to come) but this is the third and probably the least well known. Do you think it deserves its accolades?

R: I don’t know the other films of 1934 well enough to say whether this deserved to win all of Best Picture, Best Director, Best Script, Best Actor and Best Actress, but I certainly enjoyed it. It feels quite similar to Sullivan’s Travels in a lot of ways – they’re both light rom-com road trip movies – except this came seven years earlier. It’s certainly aged remarkably well.

F: I much preferred this to Sullivan’s Travels but agree there are similarities. I just think the characters are stronger here, especially the female lead.

R: I think that’s true. You get a really strong sense of the characters, which is down to a combination of the script and the quality of the performances. Where it perhaps does show its age is in how predictable it is. Most of the plot I could have had mapped out before we were thirty minutes in.

F: It would have been original at the time though so I can definitely forgive it that. Have to say I was a bit worried about this going in as I still have quite a dislike for Bringing Up Baby and this was another ‘screwball comedy’. But less screwball and more comedy really helped this.

R: Some suspension of disbelief is definitely required, but it never gets into the very contrived misunderstandings I know irritated you so much in Bringing Up Baby. Perhaps I should ask you your own question: do you think it was worthy of all five of those most prestigious Oscars? From what you’ve said so far I’d guess you might say “yes”…

F: Script, performances and direction are all very strong but I’d have to see the other films nominated that year to decide if it was worthy of Best Picture. It’s a lot of fun though so would be hard to beat in my opinion!

R: So is there anything about the film you didn’t like?

F: The ending! Not what happens as I think it’s the right conclusion for that story but it just suddenly ends. I genuinely felt we may have missed a scene or two.

R: It feels like super tidy endings where everything is neatly wrapped up must be a relatively modern trend. This is the third film in a row we’ve watched where we’ve thought the film ends a bit abruptly. That said, I quite like an ending that’s “happy” but doesn’t waste time showing us the characters talking about how happy they are.

F: What about you? Any major criticisms?

R: I don’t think I can be as forgiving of the film’s predictability as you are – the romantic arc we see here wasn’t invented in the 20th Century – but it feels mean-spirited to be too harsh on what is such a thoroughly charming movie. There’s just so much to enjoy here, and crucially it’s still pretty funny.

F: Now when I ask my trivia question I can recommend all three!

R: And unlike One Flew Over The Cuckoo’s Nest or The Silence of the Lambs it’s pretty family friendly!

R: An earlier more effective crowd pleaser than Sullivan’s Travels, so it’s got to be a yes.