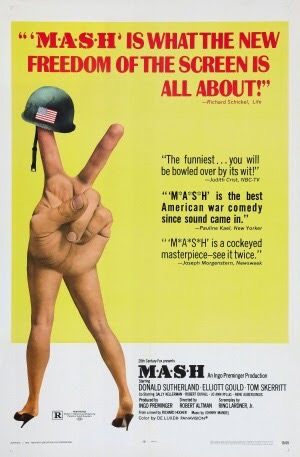 F: It’s quite obvious, after seeing Nashville recently, that this is a Robert Altman film!

R: Yep, we’ve only seen two of his films but it definitely feels like they have a signature style. Large cast, loose structure and minimal narrative hand-holding. That also means they can feel like hard work at times.

F: This cast isn’t as large as in Nashville but I think because everyone is wearing the same army uniform, I did find it harder to follow who everyone was. It also took me longer to get into – maybe that’s because I prefer musicals to war films though!

R: We both came into it knowing very little about the book or TV series, which combined with the unconventional narrative structure and morally dubious heroes perhaps made it slightly tricky for us to get our bearings initially. There’s also quite a lot of people talking over each other at the start, which doesn’t exactly help. But much like Nashville, I found it funnier the longer it went on, and expect it’s a film that rewards repeat viewings.

F: Yes agreed. Though I’m not sure I could sit through the medical scenes a second time! They make me feel slightly queasy so would struggle with them again.

R: This does have the most graphic medical scenes I’ve seen in any film.

F: I also slightly struggled to believe Donald Sutherland and Elliott Gould as qualified surgeons. Maybe it was their playboy attitude outside of the operating theatre…

R: I don’t know about that, a lot of the medics I know are some of the most excessive party fiends you’ll ever meet! I think there’s probably something about seeing life and death situations every day, and knowing a lot about pharmacology, that can lead doctors toward living it up a bit more than ordinary folk. But it is interesting at the start of the film, before it’s clear these guys are good at their jobs, how ambiguous it is whether they’re supposed to be the ‘heroes’ of the film. A lot of their behaviour you couldn’t describe as anything other than straight-up bullying.

F: They also seem unprofessional even when they’re in the middle of operating! And their behaviour is shocking at times. But maybe it’s to show that they are forced to be there and that war is such an odd place to be, bringing out the worst in people.

R: You think? I didn’t get the impression these guys have been corrupted by war, it felt more to me like they’d always operated that way. When they encounter genuine incompetence they are shocked and act to get the guy kicked out. I think it says a little bit about how attitudes to drunkenness at work have changed since 1970. The cavalier attitude you see here might have seemed kind of cool back then, whereas now, to us, it feels horrifically reckless.

F: I meant more their behaviour outside the operating theatre – the way they treat Houlihan in particular. I’m sure they wouldn’t do that back home! Or maybe they would… The story with the suicidal dentist as well. I felt a bit uncomfortable with that storyline.

R: Oh totally. It’s impossible to imagine a 21st century film with a plotline that involves “curing” homosexuality like you see here. I can imagine a lot of people might find it hard to get past that, but do you think the film has enough going for it that we can excuse it? It is – sadly – just reflecting an attitude / belief that was commonplace in 1970 (and even more so in 50s, when the film is set).

F: It does (just about!) but when I compare it back to Nashville it doesn’t feel as strong.

R: I reckon we might be agreed that’s the deeper, more interesting film. There’s a lot I like here, but there’s no escaping it feels quite dated now.

F: I’d like to see it again but it’s probably a no at the moment.

R: On this evidence I’m not sure the top 100 needs more than one Robert Altman film, and I preferred Nashville. It’s a no from me.