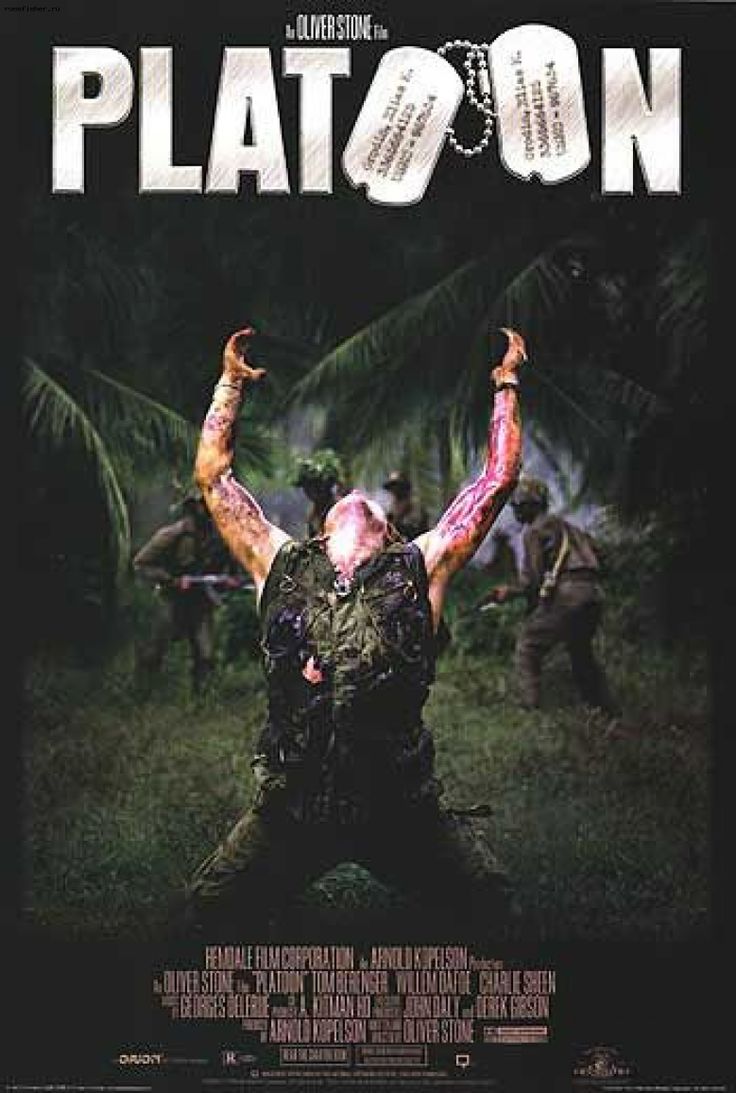 R: Half a dozen times. At least.

F: Yes, just the once though.

R: This was among the very first films I bought on DVD and for a while I probably would have listed it as one of my top five movies. As I’ve gotten older I think I’ve started to prefer films with a little more subtlety, but still, I think it’s a fantastic war movie.

F: What I didn’t realise the first time I watched this but did before re-watching is that Oliver Stone is a Vietnam war veteran. This definitely gives the film a more genuine feeling. I remember thinking the first time I saw it that some parts felt unrealistic but I didn’t feel that second time around.

R: I have no idea how factually accurate the depictions of some of the skirmishes are, but there’s a real plausibility to them. It’s almost certainly thanks to Stone’s experience of the war that he’s able to give us a lot of credible detail of what life as a “grunt” is like. And it benefits massively from being filmed on location – there are a lot of scenes where the cast are not having to dig very deep to convey what it’s like to be a fish out of water in this inhospitable place.

F: Absolutely. You can see it’s a genuine struggle for the cast and not unlike how it would have really been. I must say I don’t think this film paints the American forces in a particularly great light. The scene at the village is obviously key to this.

R: Something of an understatement there! Despite the number of times I’ve seen this film, that scene in the village never gets any easier to watch. What the U.S. soldiers do there is horrible, but the film does a good job laying the ground work so that when it happens you at least understand the frustrations of the soldiers. Again, it feels very plausible, which is what makes it such uncomfortable viewing.

F: Their actions whilst in the village are despicable, but for me it’s more how they just waltz in when they genuinely have no right to be there. Even if they had just gone in and searched the houses without then going further it wouldn’t feel right. The reality of war I guess. And whilst some are just frustrated by the whole experience (Sgt Elias), others, like Sgt Barnes, seem to thrive in that environment.

R: Got to say I think Tom Berenger as Barnes is in a different class to all the other performers in this. His role is that of a corrupted man who has been in this environment too long, has become perfectly adapted to it, and as such turned into a total monster. I think he pitches it just right: with real menace, and to use that word again, plausibility.

F: He is excellent in this. In general I think the cast are a bit hit and miss. I quite like Willem Defoe although he is hamming it up in places. And I’m not a big fan of Charlie Sheen but he’s fine in this. Others though I’m not so sure. But it doesn’t really matter because the direction and the cinematography alone convey everything.

R: I’m not sure that on a film blog you can get away with saying the acting doesn’t matter(!), but I think I know what you mean. The aim of the director is more to create an atmosphere than to make any single performance shine, isn’t it?

F: Yes you know that’s not what I meant! I’m saying that even though there are some duff performances they get swept up by the film, mainly thanks to the direction. And yes I agree with you in this case that the film is more about the ensemble than any one particular performance (good or bad!). Did this film come across as very Lord Of The Flies in parts to you?

R: There’s certainly a bit of Lord Of The Flies, in the way new power structures emerge in the absence of proper authority. Is there also a bit of biblical allegory in there? The first shot of Elias he’s carrying his gun like he’s nailed to the cross, and [SPOILERS] he’s later betrayed, left for dead, only to rise again and give Chris (Charlie Sheen) new hope. That closing line from Chris, “we did not fight the enemy; we fought ourselves, and the enemy was in us” sounds to me a lot like the sort of thing a disciple of Jesus would say.

F: Didn’t spot that myself but now you mention it I can certainly see it. Do you reckon you’re spotting these things because you’ve seen the film so much?

R: Yes it’s almost certainly true that you’re more likely to spot (or go digging for) subtext watching a film for the seventh time. I understand Oliver Stone did consider himself a Christian when he made this film (he’s now a Buddhist), so who knows, there might even be some directorial intention behind it!

R: We’ve got Saving Private Ryan and Apocalypse Now still to come, and in spite of this film’s limitations I think I like it more than both of those. So let’s say yes.

F: This is the toughest choice so far. For now I’m saying no but I’m reserving the right to think about it and change my mind later on!